Morocco is an ancient, mysterious and breathtakingly beautiful country that will seduce the senses. It is a land of contrasts: ancient and modern, Arab and Berber, European and African. The picturesque and isolated Berber villages of the High Atlas mountains, the dramatic gorges and the desert seem untouched by time. In cities like imperial Fès, coastal Essaouira and magical Marrakech the medieval intricacies of the medinas go hand in hand with fashionable rooftop bars and chic renovated riads. Join us on our cooking holidays in Morocco for an experience of a lifetime. 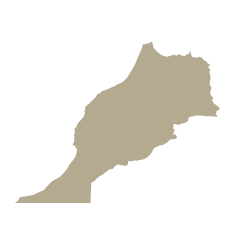 Rich in both history and flavour, Morocco cuisine is one of the most exotic in the world. The sophisticated Moroccan palate arose as the country played host to travellers and rulers from such disparate lands as China, India, Spain, Persia and France. An air of French sophistication infuses the Saharan oasis with a European flavour.

Moroccan cooking is strongly characterised by expertly blending spices, adding fresh herbs or fragrant infusions such as orange or rose water. Perhaps the defining feature of Moroccan cuisine is the combination of savoury with sweet, most commonly witnessed by the addition of fruit to meat tagines. Moroccan food is mostly homegrown and organic, cultivated by small-scale farmers and delivered daily to the bustling markets and souks around the country.

It is in this oasis and in our kitchens that we will introduce you to the exotic combination of ingredients and techniques that exemplify traditional Moroccan and fusion cuisine.