Immerse yourself in the Veneto region, known for its outstanding natural beauty, historic culture and dedication the very finest food. Local hunters take you into the hills in search of seasonal truffles. Try the area’s best wines, cheeses and salumi, and go off the beaten track to discover family-run restaurants. You will leave not only utterly relaxed, but also trained in truly delicious Italian cooking.

Travellers who like to join a small group of like-minded companions to share the experience with. If you are looking for daily cooking classes and excursions, and don’t want to worry about logistics. We will take care of everything! 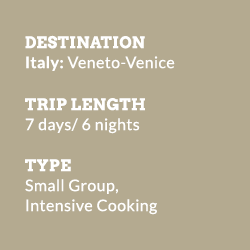 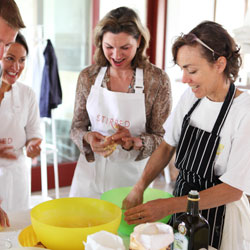 Situated in Italy’s northeast, Veneto extends from the majestic Dolomites to the blue Adriatic Sea, by way of an expansive range of hills and a valley furrowed by rivers, lakes canals. In this spectacular natural setting lies a rich cultural heritage that renders the Veneto such a fascinating region, from its cities of art and romance such as Verona, the magnificent Palladian villas scattered along the lakes and the Venetian Lagoon where perhaps the most unique city in the entire world stands- Venice.

We’ll take you off the beaten track to discover the hidden jewels of Veneto, quaint villages, high mountains and vineyards. No visit Northern Italy would be complete without experiencing the unforgettable sights and tastes of Venice, so we’ll take you to the Rialto fish and fresh foods markets to pick some of the best seasonal produce to bring back for your classes.

Working alongside an acclaimed chef, you’ll be able to cook and sample some of the most delicious regional dishes from robust Ossobuco with saffron risottos and pastas packed with flavour to rich fish soups and creamy polentas, accompanied by a chilled glass of local wines. Wonderful home made mustards served with both meats and cheeses are there to be tried. The neighbouring mountain cheeses are outstanding, sampling the nutty Montasio and soft rich Asiago with home made mostarda and a glass of Prosecco is a truly delicious experience.

The use of spices imported from the Orient is so important to the specialties of the area, as is quality fresh seasonal produce, and mastering these will give you a solid base upon which to create many inspiring and innovative dishes both here and at home.

Fresh out of Angela Hartnett’s Cafe Murano kitchen, Maurizio Pace returns to his native Italy to  host his first culinary extravaganza at the Palazzo in the Veneto this September.
Maurizio has all the credentials of a true great Italian chef. Born in the south of Italy, he discovered his passion for food at a young age, working alongside his grandparents on their farm making wine, bread and different cheeses, preserving vegetables and jams.  Later he went on to hone his skills in Michelin star restaurants, learning his trade in Rome and Tuscany before finally moving to London in 2009. After a stint working with Angela Hartnett at her flagship Murano, Maurizio was appointed Head Chef at sister restaurant Cafe Murano in 2015, where he has just finished a 3 year residence in order to pursue other ambitions.

Our elegant Villa is the proud home of a noble family, who have defended the surrounding towns and valleys since the 15th century and still run the property today.

Entering the villa through the imposing entrance hall decorated with giant swords and the family’s battle standard, the ground floor has two living rooms, two dining halls, and a designer kitchen with traditional Venetian open fireplace. The bedrooms, complete with their own elegant bathrooms, are each unique in character, style and design.

Long lunches will be taken in the granary where the family’s silk production took place, it opens out into the garden with a stunning view of the rose garden. After a dip in the swimming pool, alfresco dinners will be enjoyed under the monumental chestnut tree.

All 2021 dates for scheduled classes are sold out now.  For private groups, please email us on info@gourmetontour.com

We will be releasing the 2022 dates soon.   If you wish to be included on the waitlist, please email us on info@gourmetontour.com

Per person in British pound

Fly directly to Venice. We arrange all local transfers.

“Traditional dishes of the Veneto regions are your stars”

“…what makes a stay at the Villa really stand out is the holistic approach it takes to learning. Not only are you shown new skills and techniques that you can use at home, but you learn how to assess, appreciate and source the individual ingredients you are using – the oil, the cheese, the wine and the vegetables, the meat and the fish. You are with like-minded people in an inspiring environment and in the company of the hospitable owners. What’s more, there’s enough relaxation time built into the itinerary to make it feel like a proper holiday, too.”

What happy guests said about this tour…